“I never had the intent of going into this line of business hoping to make a fortune. It was a purpose that I felt I had to fulfill. I truly respect the art and I owed it to myself and this craft to give it my all. Calligraphy, to me, is so much deeper than receiving a pay cheque, it is my beliefs.””

Could you please introduce yourself to our guests?

I am Calligrapher Au Yeung Cheong and I have been producing street signs in Hong Kong for over 30 years.

Can you tell us a bit about your background? Did you grow up in Hong Kong?

I came over to Hong Kong in the 1970’s from Guangdong and I have always enjoyed practising calligraphy and drawing, even at a young age. When I was young, I was very fascinated by the characters engraved on copper coins, so I began studying calligraphy. My father knew how much I loved writing so he would always buy me lots of letter tracing booklets where I learned how to write in block letters resembling the Song Dynasty. I would also rehearse ancient Chinese scriptures as a child so much of my inspiration was drawn from these readings.

What do you think makes your work so recognisable across the city?

If you observe closely, you will notice that my work is all in Zan Script, which was the script used by officials and royals during the Tang Dynasty (618-907). It is extremely difficult to master and I would say that my work closely resembles the original script, utilizing thick brush strokes. In fact, I find it quite amusing because there was once a famous calligrapher by the name of Au Yeung Xun who was renowned for using Zan Script during the Tang Dynasty, and I am Au Yeung Cheong. Though I may not be a descendant of Au Yeung Xun, I do have hopes of becoming as famous and well-respected as him one day! 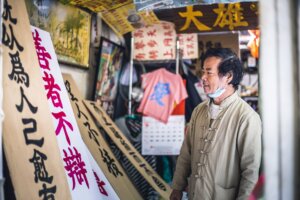 Why did you decide to go into this trade?

I never had the intent of going into this line of business hoping to make a fortune. It was a purpose that I felt I had to fulfill. Many people often go into a trade in hopes of making a lot of money and be able to reap the fruits of your labour, but that was never my goal. I truly respect the art and I owed it to myself and this craft to give it my all. Calligraphy, to me, is so much deeper than receiving a pay cheque, it is my beliefs. To paint you a picture, many climbers that choose conquer Mount Everest are put under such dangerous circumstances with little oxygen, yet their calling gives them purpose and motivation to fulfill their mission. This is how I feel about my work.

Can you share with us the creative process – from developing the message you wish to convey through to the creation of the signage?

I would first ask my client what type of material they would like to use for the street sign and whether the signage will be showcased indoors or displayed in a public setting. Then, I would suggest the signage be written in Zan script because it looks much more powerful when every stroke is closely linked. Every stroke is pointed to the front and upper corner of the pen, with pen peaks, outlines, and details displayed boldly. The aesthetic gives off such a strong presence and it is undoubtedly pleasing to the eye, unlike a computer character! Without Zan Script, the text will have a looser structure. Once my clients see the final product, they instantly fall in love with it.

You have been perfecting your craft for over 40 years. How do you think this trade has changed from when you first started in the business till now?

In recent years, there have been less and less street signs being produced due to government regulations and changing consumer preferences, which many of today’s neon signs are now being replaced by more energy efficient LED signs. In addition to this, computer fonts and electronic inkjet technology are also becoming more and more advanced and hence, many companies have shifted towards these options since the production cost is much lower than that of hand-made signs. It has been difficult, but I have now switched to producing compact light boxes that businesses and consumers alike can display indoors, inside their stores or even at home. 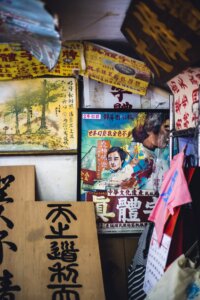 What do you hope to convey through your craft?

Through my work, I hope to share my passion for calligraphy with others and preserve Chinese culture. Writing well is the basis of being a person. My greatest wish is for someone to inherit this craft and continue carrying forward the Zan Script, as it has been such a paramount part of Chinese history.

If there was one thing you would like to wish for the future of the city, what would it be?

I hope that society can learn to appreciate, nurture and pass on this art. If we as a people do not preserve our own culture and keep these traditions alive, it will become forever absent in the society we live in.

Given the existing circumstances, what do you do to explore now that traveling is not permitted?

Exploration has always been about creation for me so the pandemic has not had a significant impact on my day-to-day activities. I continue spending a lot of time, perfecting my craft and creating paintings and calligraphy that others can enjoy. I’ve even recently started to write each character backwards to further challenge myself!

If I can go anywhere in the world, I would like to visit The Great Wall of China in the Huairou District of China because that is where the Zan Script I base my work from is originated.

In 3 words, how would you describe Hong Kong? 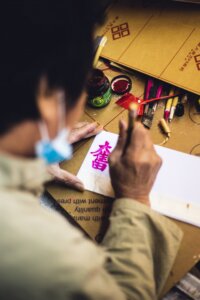